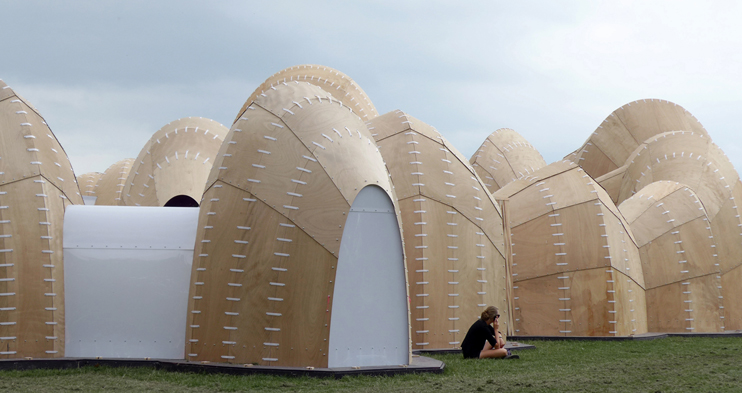 The Velvet State combined performance and architecture in one project at the Art Zone at Roskilde Festival 2013.

The core of the project emerged via an ongoing dialogue between the performers and the architects, adopting and merging the two disciplines into one universe.

Simon Hjermind Jensen was the architect behind the concept and the design of the building. The performance part was developed in a dialogue between Fiction Pimps (DK) and Collective Unconscious (UK), and directed by Inga Gerner Nielsen.

The performance explored the idea of a sensuous society – a possible society where the sensual and poetic perception of the world is at the center.
The physical structure covered an area of 794 square meters with the highest point of 7 meters. It consisted of seven parts, which together created one united structure that framed the performance and together with it formed a parallel universe.

Please scroll down for further description. 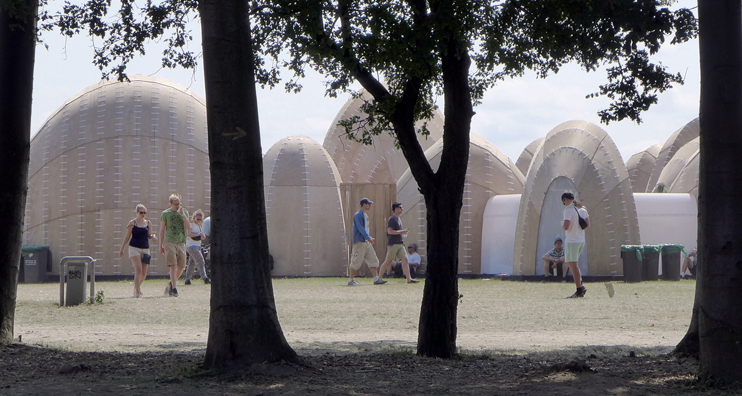 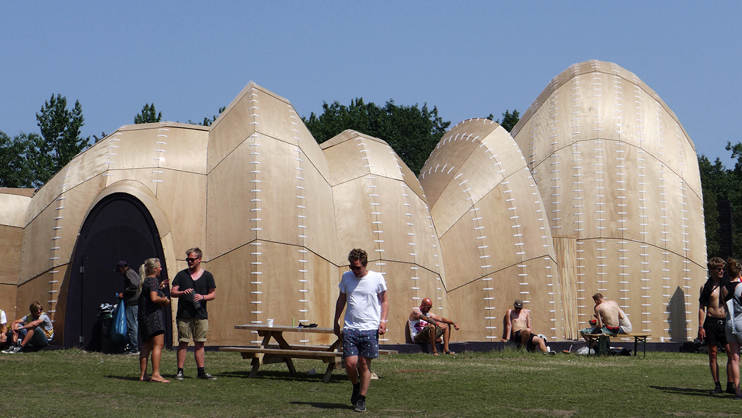 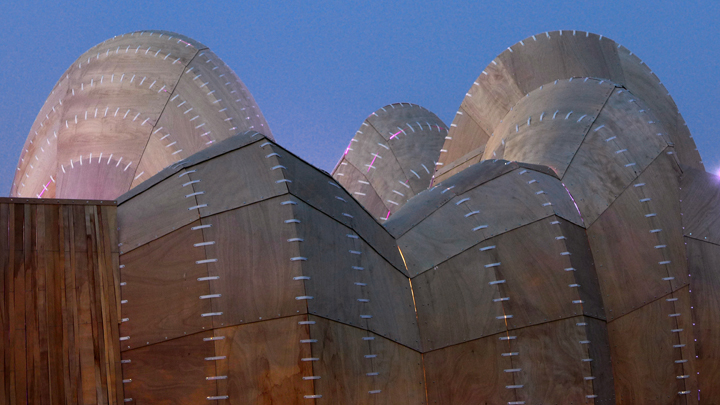 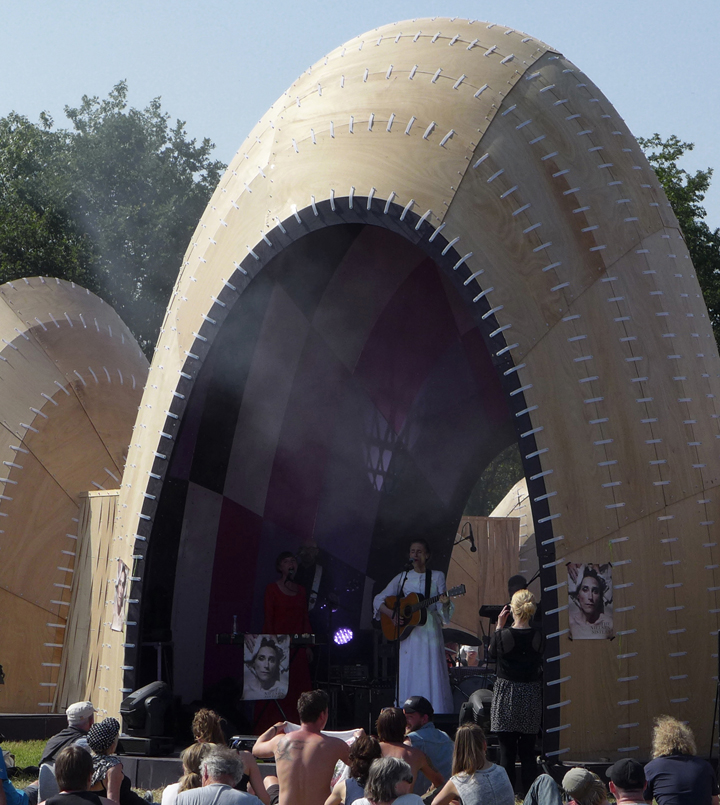 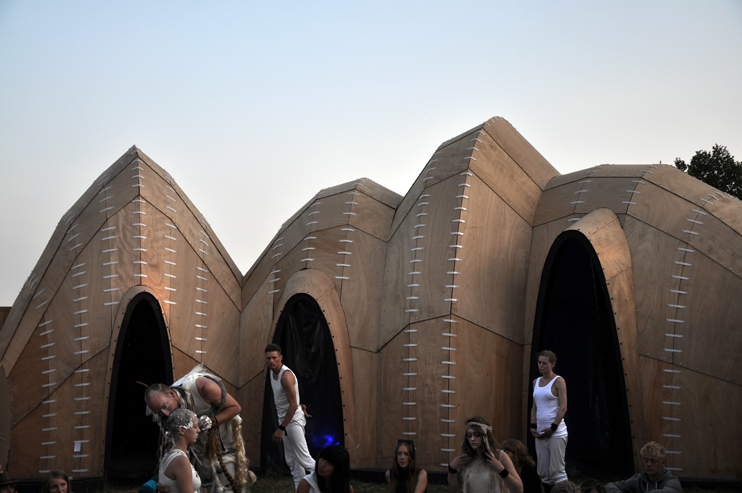 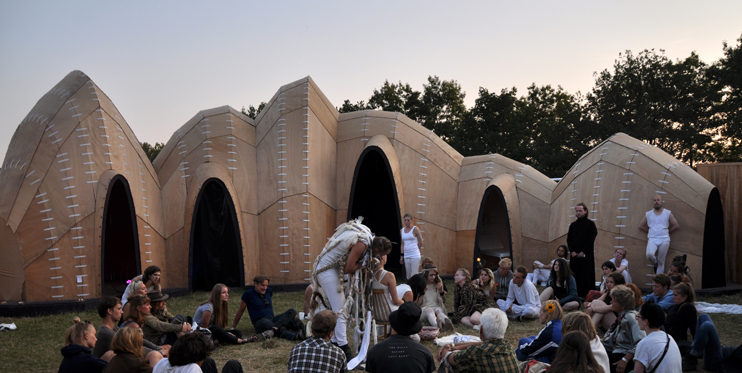 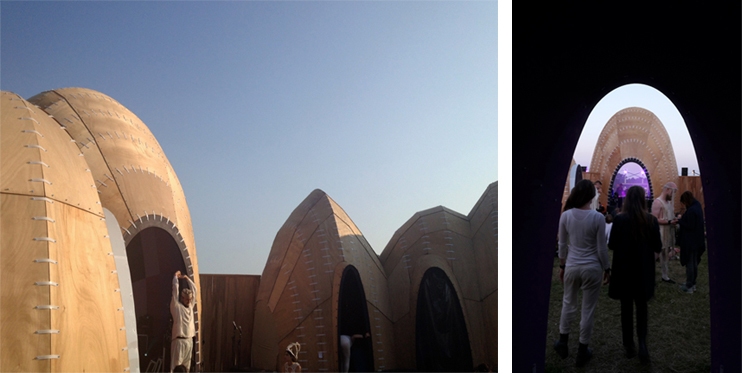 The seven parts of the structure were The Ring, The Stage, The Ridge, The Reactor, The Barn, The Dressing Room and The Courtyard. All parts were built in shells of plywood assembled with bolts and “sewings” in polycarbonate. The whole project was designed over the catenary curve as the section itself. And each part consisted of a sequence of sections which were variations of this one curve. In this way every part became individual with its own appearance and spatial qualities, and at the same time it was part of a greater whole.

The plywood shells acted both as façade and as support for the structure. 12, 9, 6 and 4 mm thick plywood was used. The thick plywood was placed in the bottom and the thin in the top. Each plywood shell was bent into a singular curve and all together these curves created the structural support for the whole project. The shells were fastened to a leveled base which was attached to the ground with one meter long earth spikes.

Part of the architectural unfolding was to investigate how variations of the same curve could create a rich spatial appearance. Also the unfolding tested the structural concept and assemble methods in a large scale.

The performance acts took departure in rituals and in anthropologist Arnold Van Gennep´s concept of liminality. This liminality was incorporated in the physical structure. The courtyard and thereby the inside of the structure was only accessible via three spaces. These spaces acted as thresholds and liminal spaces towards the performance.  Inside the structure in the sensuous society was formed by 10 archetypes: The Bewinged, The Alchymist, The Dictator, The Killer, The Pink Narcissus, The Fetichist, The Critic, The Idealist, The Voyeur and The Creature. The society was also inhabited by maintainers that maintained the archetypes and engaged the festival participants with the archetypes.

During the Festival different guests performed at The Velvet Stage. The Nielsen Sisters (DK), Dorit Chrysler and Baby Dee (US), The Triangle Project (US, Cairo, DK), Voina (RU), Tantra (DK), Kimatica and DJ Hvad to name a few. The performance program was curated by Gry Worre Hallberg.